What is Cryptocurrency’s Support?

by Xapa Wallet Author
Today, most financial market investors need technical knowledge to analyze Chainlink price chart or Dash and Litecoin price prediction and earn money by buying and selling these assets. Technical analysis is used as the most common type of analysis in all markets. This analysis has specific tools that draw a suitable time horizon for the investor to predict the market trend and announce the best buying and selling position.
Lines (areas) and support and resistance areas are technical analysis keywords that understand the concepts, and practical use of them seems necessary for all market participants. In this article, we try to introduce these concepts and explain how to obtain resistance lines and support lines.
Since resistance and support are related to more basic concepts, to understand them, it is necessary first to explain the relevant concepts in simple language to get to the point.

What is Technical Analysis?

Technical analysis, in simple terms, is the study of the price behavior of a financial asset such as securities or a cryptocurrency such as bitcoin over some time as well as its forecast. There are factors to focus on in technical analysis: time, price, and market psychological factors. When the pattern of price movement in a market is significantly repeated, investors who realize this sooner than others can benefit more from the market average with their strategies.
Technical analysis helps us be more successful than others and be equipped with appropriate tools in this field by using tools such as charts (bar, candle), indicators, indicators, etc.

This chart is fantastic for technicians! The candlestick chart is similar to the bar chart, except that the areas between the open price and the close price are colored to show the market’s overall movement over time. The candlestick chart shows the price movement in specific periods. Each candlestick is drawn based on four prices: Open price, Last price or Close price, High price, Low price.
If the market moves upwards over time and is called a bullish market, the distance between the two prices is green, and if it moves downwards and is called a bearish, the area between the two prices is shown. The candle diagram is drawn in red. Of course, instead of the two colors, green and red, the two colors, white and black, are also used to show the upward and downward market, respectively. 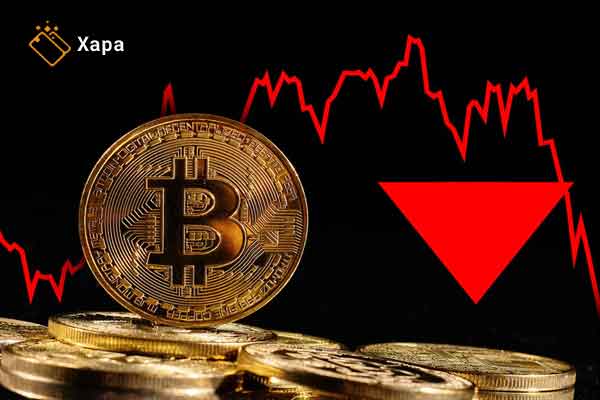 Depending on the investment you are making, you can use different time frames for technical analysis. For example, if you trade daily and want to take advantage of cryptocurrency market fluctuations, you can check the market price at intervals of 30 minutes, one hour, or 4 hours.
On the other hand, if you are a long-term trader and you are waiting for the market to move towards your buy and sell order range, then you can analyze the price behavior to find a recurring pattern over the day or month.

As you monitor market movement, you may find patterns and prices that show up in your chart. One of the unique formulations of a chart is the Trend line. The trend is related to market psychology; That is, it shows the general feeling of the market, including fear, greed, expectations, etc.
When the price of a cryptocurrency is rising in the chart, it means that market agents and brokers feel good about that cryptocurrency and buy it. This will intensify the upward movement of prices.
The importance of the process lies in the fact that if you can recognize it, you have made a profit or avoided a loss. Some trends are easy to spot. For example, between July and December 2017, there was a considerable uptrend in the Bitcoin market and some other cryptocurrencies, so that a continuous and clear uptrend was visible. But trend recognition is not always easy, and it can be said that drawing a trend line is an art.
The primary method is proposed to draw the trend line, both ascending and descending:
Once you have identified a momentum or price acceleration in the uptrend chart, connect the valleys or minimum price points to chart an uptrend. To draw a downward trend, connect the peaks or maximum points. 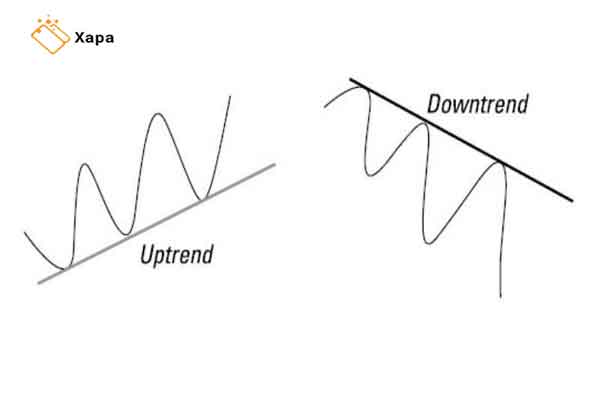 The support line is a barrier to the price that does not allow it to go below. This level is always at the bottom of the current market price chart. People who recognize a support level or line expect to buy cryptocurrency at this price level. One of the most common ways to detect a resistance line is to examine cryptocurrency’s past performance on the chart. It is important to note that a price level can be a level or line of resistance at any given time in which price reductions can be prevented.
In the support line, price reductions are prevented by increasing demand. Buyers are likely to call everyone who looks appropriate if there are only a few. Therefore, increasing demand contains price reductions.
As you can see in the image below, one of the essential bitcoin resistance lines was created at a price of around $ 6,000. During 2017 and 2018, the price of Bitcoin went down several times, but each time the resistance line prevented the price from falling. Note that in this article, reference to the resistance price level is approximate. In principal resistances, resistance occurs in a range rather than exactly a particular price level, rather than we have a price level. 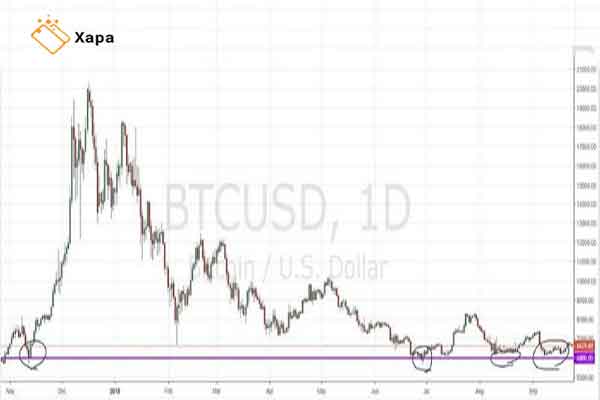 Each time a resistance level or line is exposed to a price attack to break, it becomes stronger. But after solid support is broken, the market sentiment moves in a direction that continues to decline and move to the following support line.
Supports, displayed in lines or ranges, actually identify areas where the traded asset is in high demand, and there are no sellers at prices below the support levels. Also, in resistance lines or ranges, the market is saturated with the supply of traded assets, and the so-called buyers’ order is lower than the resistance. The following chart, which is related to Bitcoin, shows the support and resistance ranges: 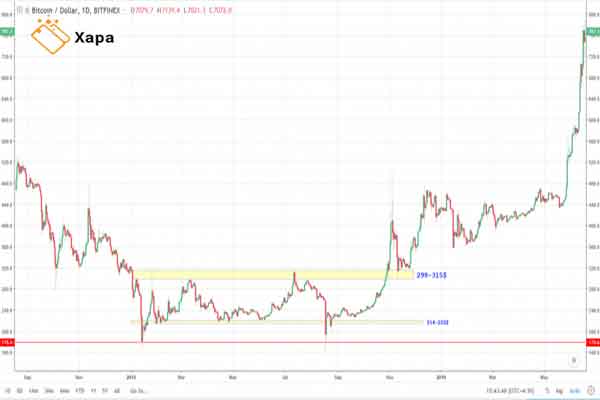 This chart showed the price changes of Bitcoin in 2015. The $ 298 to $ 315 range in 2015 was a substantial resistance range for Bitcoin; Bitcoin tried several times to cross this range this year and failed. Also, in the same year, the $ 214 to $ 220 range for Bitcoin played a significant support range, as the price was volatile after the break, and there was strong demand for it.
After breaking the resistance range on October 30, 2015, the price of Bitcoin stabilized on the resistance range, and the large yellow spectrum, which had played a resistance role for Bitcoin for ten months, became a new support range, and the price fell. In November 2015, it was below this range. After breaking the main resistance range, the long-term uptrend of bitcoin began. As mentioned in the previous sections, traders usually consider the closing price of each candlestick and determine the support and resistance levels according to this price and confirm the support and resistance failure. 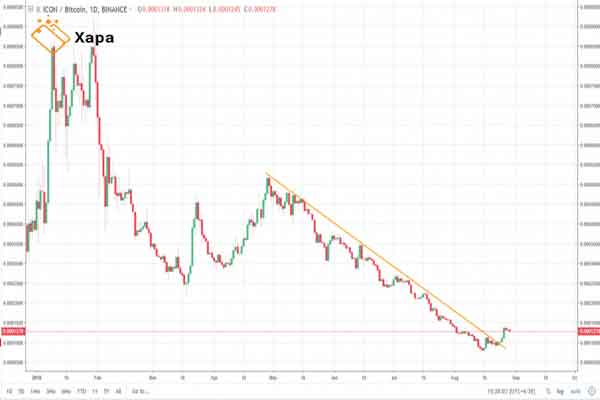 In this chart, you can see the ICX / BTC currency pair trend line, which lasted from late April to August 2018. The icon has tried several times to break the downtrend line, but each time failed until it broke the downtrend line in late August and experienced relatively significant growth for the next few weeks. 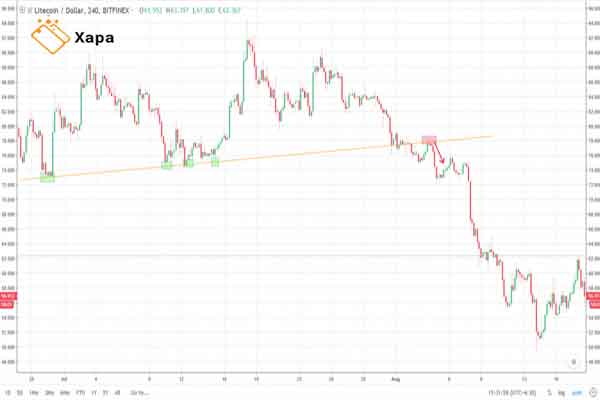 This chart shows Litecoin from late June to early August 2018. The support formed in early August broke and caused Litecoin to leave the medium-term uptrend. After Light back to the uptrend line, Litecoin is in a downtrend. Pull Back: The last time, the price returns to these lines after breaking the support and resistance lines and continues its new trend after failing to break it again.

A simple way to identify resistance and support lines is to look at the Round Numbers. Behavioral economics findings empirically show that rand numbers can be considered barriers to price movement. Of course, the definition of rand number in different markets can be different. For example, we can point to the resistance of the dollar price to 20 thousand and recently 30 thousand tomans in the domestic foreign exchange market.

This is not a formal rule, but looking at price charts can show its relative accuracy. This rule states that if there are supposed to be 500 resistance lines, the price will be 480 or 520.

Pay Attention to the Past of a Chart.

Looking back at a chart can help us identify levels, especially when the approximate sequence of peaks or valleys was around a price level in the past. The greater the number of peaks and valleys in a price level, the greater the primary levels’ credibility.

It is suggested that you use the Fibonacci retracement tool to identify resistance lines and support lines. By adding Fibonacci tools to a trend line on platforms, you can instantly see several levels of support and resistance; Extract it yourself one by one without the need.

This article tried to explain the importance of this analysis by mentioning its introductory concepts such as technical analysis, time frame, and trend line, using its specific tools. Levels or lines of resistance and support are among the essential images used to analyze all markets. Knowing these concepts is crucial to trading and investing in digital currencies.
In short, support is the level at which sellers reach more buyers. Resistance is also the level at which buyers face an increasing number of sellers. But trading is just one way to invest and make a profit in the cryptocurrencies market, and another popular way is to extract this digital asset. So if you want to make a profit in the cryptocurrency market by mining, we suggest you also read the article ” What is ASIC? “. 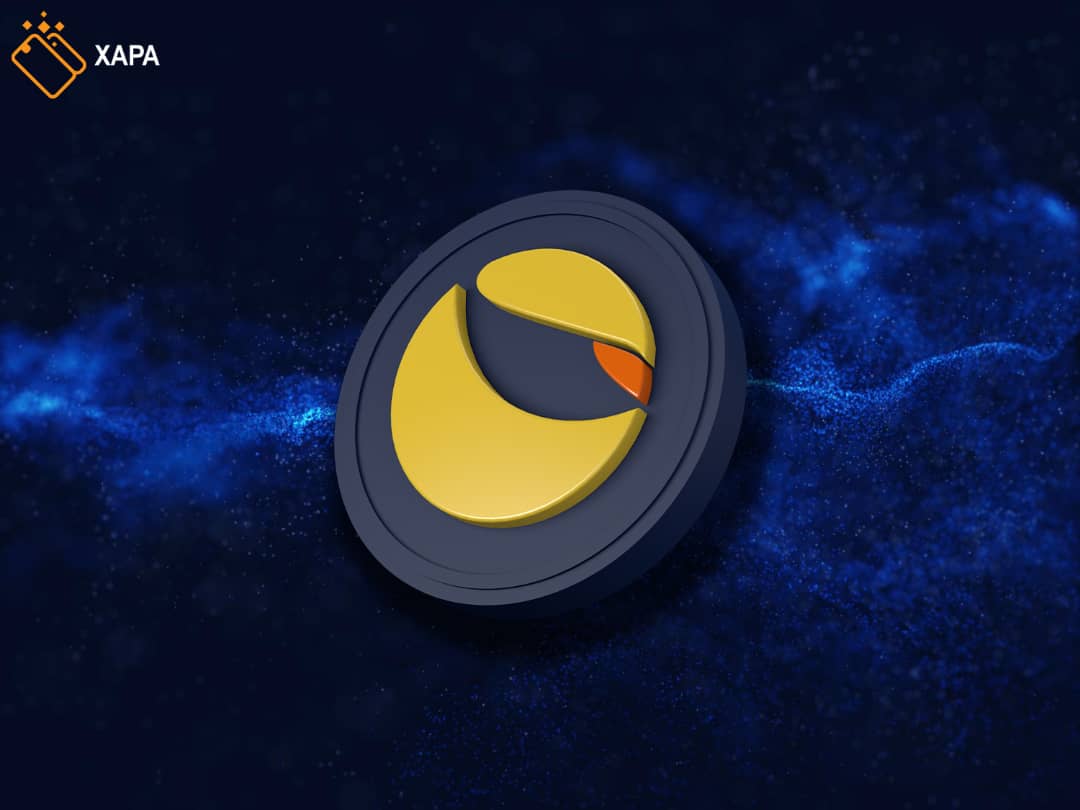 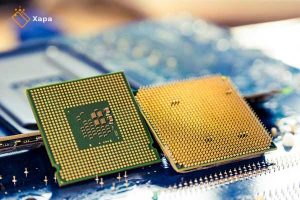 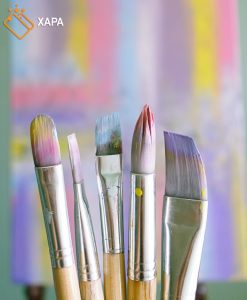